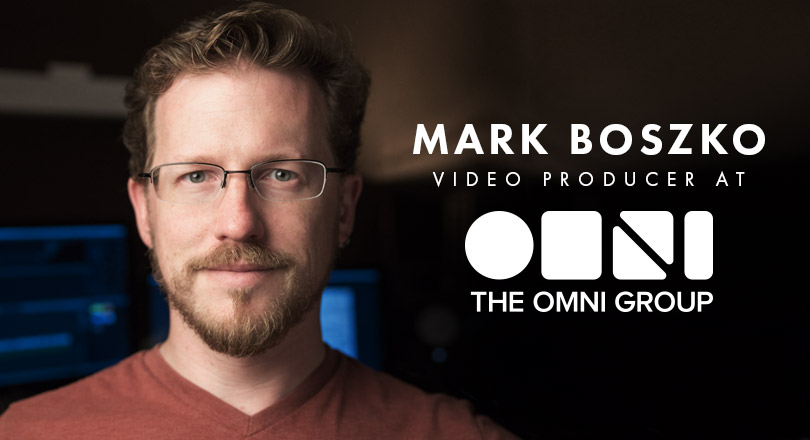 Mark Boszko is an in-house video producer at The Omni Group, makers of exclusive Mac and iOS productivity software. Mark has worked across the industry and has been hooked on filmmaking since age five.

How did you get into video making?

When I was five, I saw a television special on the effects of The Empire Strikes Back, and I think that was the first time that I realized that hey – people actually make this stuff! Ever since then, I’ve been hooked on filmmaking and VFX.

I got into television under the assumption that it would be a stepping stone to feature film work, but I’ve found that they’re very different universes, with little overlap. Still, I made the best of it with my interest in the science-y side of things, which led to work at local production companies in the Maryland/DC area, editing and making motion graphics for shows on History, Discovery, National Geographic Television, and other non-fiction productions. I continued to work on the occasional short, like for the 48 Hour Film Project, and fun spec spots, like Attack of the Giant Amazon.

A year ago, I decided to stop being a freelance nomad and join The Omni Group, so we packed up the family and took a road trip across the country to our new home in Seattle. Along the way, we tried to stop at as many movie-related locations as we could, like the cemetery from Night of the Living Dead, Mount Rushmore (from North by Northwest, of course), and Devils Tower from Close Encounters of the Third Kind — man, how crazy is it that that thing actually exists? Of course, any and all free time that I had gained from having more regular work hours was soon filled by my new podcast about movies and VFX, The Optical.

Where do you go for inspiration?

I do a lot of motion graphics, so Motionographer is a nice stop for inspiration, but I really love Art of the Title, which archives and categorizes motion picture title sequences, both new and old. There’s a lot of great inspiration in there — I especially love work from Saul Bass, Maurice Binder, and Pablo Ferro. I also love seeing what the latest tutorial is from Andrew Kramer – even if it’s not something I can use directly, it may spark an idea about how to frame a concept down the road.

Really, watching new (and new-to-me) films is one of the biggest ways that I get exposed to new images and new ideas, so it’s an eternally evolving mélange of inputs. I love seeing the latest VFX-heavy spectacle (and reading the Cinefex article on how it was put together), but I’m also making my way through Roger Ebert’s Great Movies list, which exposes me to a lot of things I never would have stumbled across otherwise. It’s my film school.

Who do you admire?

There are a lot of film directors who inspire me, but I really admire my close friend AAl (yes, that’s two capital A’s), whom I’ve known since high school, and who is the hardest working guy I know. He’s taken a little comedy column he used to write for friends back in the early AOL days, “Sarcastic Voyage”, and turned it into an ever-evolving creative venture, that has most recently taken the form of a sketch-comedy podcast that marked its fifth anniversary and 180th episode with a live performance here in Seattle.

He and I have argued a lot over the years over how we approach the creative process (it usually boils down to “now” vs. “better”), but he’s taught me a lot about the value of persistence, and I’m fascinated and gratified to see him producing the work he’s doing now, all these years later.

What’s a typical day in the life of you at work?

It depends on what stage of production I’m in on a video, I suppose. Once a week, the Marketing group has a meeting, and we go over where we are in our projects. In any given day, though, it could mean writing treatments or scripts for upcoming videos, researching a workflow that we’ll feature, designing a test database that we can show off in a video (you don’t want to see my real OmniFocus library), cajoling support staff to host a feature video, setting up a tiny green screen studio in the office across the hall from the edit suite, or holing away in the suite all day while I edit, animate, or record my voiceovers.

What type of videos are you making at your company?

We make an array of videos, from new product introductions and support and feature-focused tutorial videos to videos featuring interesting uses of our software “in the wild.” We’ve also just started on videos about workflows, which provide more of a conceptual approach to integrating our software into your work and life, as opposed to the nuts and bolts of how a particular feature works.

The bulk of the videos we produce feature our software in some way, and having a lot of screen recordings is unavoidable, but we try to keep things visually interesting and humanize things with either a live-action host, or putting the screens into live-action shots of devices, whenever possible. The screen movies are usually edited a bit to smooth things out, and I’m developing my own helper software that scripts out mouse movements and actions to make things even cleaner.

The new workflow video we’ve got in production is a lot more motion graphics and no screencasts at all – we wanted to show the workflow in a way that evoked the concepts and tied in to iconography from our apps, but in a more sketch-like way that won’t look stale and out of date the next time Apple updates iOS or OS X, and we tweak our software to align with the new look.

How has your collaboration changed since using Wipster?

It used to be really hard to track people down to get feedback on video cuts, but with Wipster, it’s a lot easier to get the notes all in one place, and have conversations between interested parties – way more productive than me trying to collate disparate notes from several email threads after-the-fact.

There are still a few features I’d like to see added (like real time collaboration) to Wipster but you’ve been very responsive to requests from me so far. I know Wipster will only get better, and even without my one or two pet features, people in my company are really enjoying using the service – being able to click right on the video frame and point exactly to what they’re talking about is not only fun, but reduces a lot of confusion when it comes to interpreting notes.

What would you say to a company thinking of using video in their marketing?

Don’t forget that any video you post is really part of your marketing, even something that you think is just a how-to, tutorial, or explainer type of video. People will watch those before they sign up for your service, buy your software, or order your product, because they want to see how easy it is, or if it will solve a particular problem for them.

If you’ve got screencasts at all, treat it as part of your “demo version.” It should be just as polished as your main marketing material. Don’t wing it. Write a script. Edit the screencast. Make the cursor/finger movements as smooth as possible. The video shouldn’t be you stumbling around on your device, umm-ing and ahh-ing your way through a tutorial. Respect the viewer’s time.

On touch devices, remember that the viewer has no way to anticipate what’s coming if you don’t provide a “finger” of some sort to guide their eye to the next tap or gesture that’s about to happen. Without that, all they see is a static screen, and then suddenly, something happens. Guiding the viewer’s eye is really important to comprehension. If we’re not shooting live action, I animate my own “finger” cursor in our iOS screencasts. I talk about that a lot more in the app video talk I gave recently, and on my blog.

How will companies use video in the future?

The New York Timeshas been integrating video and other “multimedia” into special feature stories for a while now, like the famous Snow Fall story from 2012. I think we’re going to see more and more of that sort of seamless integration into the web experience.

Also, with things like Amazon’s Mayday video support on their Kindle devices, I think we’re going to see a lot more video where we used to see just audio or text. As compression gets more efficient, bandwidth expands, and more companies start to embrace 4K, I only see this integration getting stronger.

How KQED saved five hours of editorial review per video

KQED isn’t just a media company. Their mission is to ‘inform, inspire and involve’ the people of Northern California with their community-led...

22,000 students, 2300 employees, and in the top 2% of universities in the world - Victoria University of Wellington is a world-class educational...

Production Agency LEAP Spark is in the business of making moments that matter. As a part of LEAP Group, an independent network of specialized...